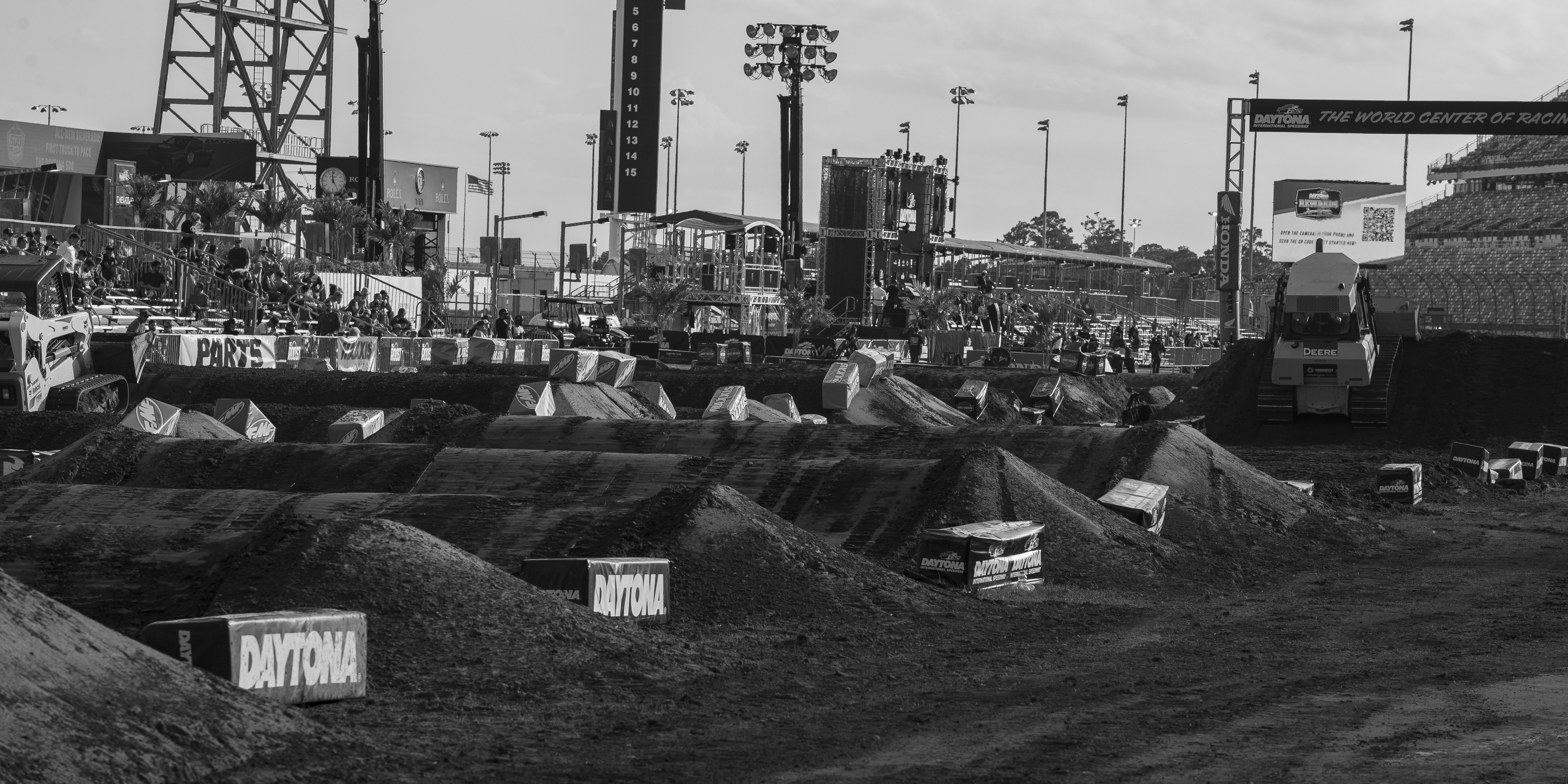 Well, the Monster Energy Supercross series made its way to the Daytona International Speedway once again and damn was it ever a beautiful day for some dirt bikes.

It’s already such a cool event for me. Mainly because it was a race that my family and I always used to talk about going to when I was racing growing up but it just never worked out that we were in Florida around race time. Fast forward over a decade and I’ve gotta admit, it’s pretty awesome to drive an hour or so and be there these days.

One of the other reasons that I enjoy Daytona Supercross so much is that it is just SO laid back. I mean, compared to other Supercross events, this is a cake walk for photography. You get to stand right next to the track, which is another unbeatable aspect of this race. It pretty much reminds you of an Outdoor National. Seriously, if you’ve never attended this race I highly recommend making the trip to Florida for it.

Hells yea! I highly recommend paying for the trackside access. Why would you not? You’re literally right on top of all the action. A place you don’t normally get to be for a Supercross race. Honestly, I wouldn’t want to pay for a seat in the grandstands and have to look through a fence all night. BUT, that’s just me personally. My enjoyable  Supercross experience may be much different than yours.

I’ve actually never sat up there so I don’t know what it’s like to have a seat to sit in all night. But, I have been up in the stands during the event and yea….the fence would just be a no go for me. In my mind, it’s well worth it to be down on the track. You can just sit down on the front stretch of the speedway if you need to. It’s Daytona Supercross, you gotta feel it all!

Side note: Be sure to hold onto your drink though. It WILL roll away, you will not catch it, and it will definitely roll under the fence and onto the track. Then you just spent 6 dollars for a water you can no longer drink. It’s honestly never happened to me but I’ve seen it countless times, hahah!

I always tend to get there right after practice starts. I spend most of the early afternoon walking around grabbing shots. It’s a primo time to get back and forth between pit bits, qualifying and a little behind the scenes type content. I usually run into people within the pits that I haven’t seen in quite a while and it’s nice to catch up real quick. I try not to talk for very long as they have a much busier day than I do, haha!

After a few hours of roaming around getting the shots I want I usually start locating a “home base” if you will for the night show. Home base is essentially where we will stand for the remainder of the evening. Well, the wife will stand and I will be able to find her. There’s times during the races that I tend to wonder off real fast to grab a shot from a shot I like.

Once the sun goes down, and the lights begin to dim..it’s go time!

I have put together a small list of my top shots from the day/night below. Should you feel so inclined, have a little look and enjoy! Check out more images and content over on the M81 Instagram!

I appreciate you guys checking out this blog post! If you would like to get yourself some Monster Energy Supercross tickets for a round near you, check the link below! Now, at the time of writing this blog the season is a good portion of the way done. However! You can look into Monster Energy Cup in October, plus, it’s never to early to check out the schedule and get tickets early!

GET YOUR MONSTER ENERGY SUPERCROSS TICKETS!